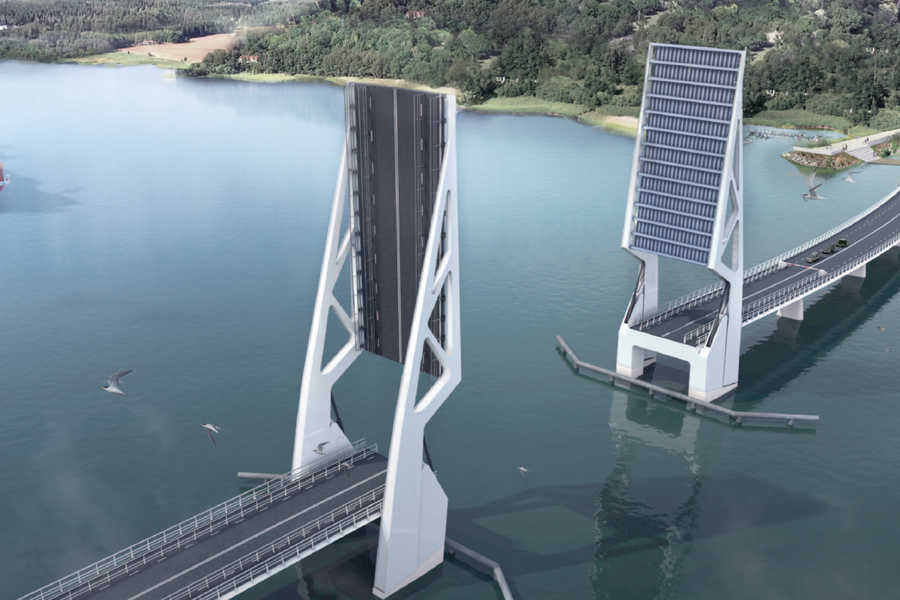 In Sweden, the existing Hjulsta bridge that connects Norrköping to Uppsala via the Highway 55 needs to be replaced by a new bridge. The architects ZJA, together with Bosch Slabbers Landscape + Urban Design (landscape architects) and Iv-Consult (engineering consultancy) formed a Dutch design and engineering team that collaborated with NRC Infrapro and the Swedish Transport Administration to formulate the specifics of the bridge. The subsequent concept design brought all requirements together, resulting in a beautiful slender steel bridge both with regards to the fixed deck as well as the moveable part.

In Sweden, the island Märson and the land along the banks of the Mälaren Lake in which it is situated, enjoy a slightly warmer climate than the surrounding region. The hilly landscape is a patchwork of pastures, meadows and forest. The banks of the lake are curvy, with many bays and inlets sustaining a rich flora and fauna. Highway 55 runs from Norrköping to Uppsala and daily more than five thousand cars use the old Hjulsta bridge that connects the island of Märson with the north bank of the lake. The bridge, built in 1953, has a vertical clearance of six meters and has to be opened frequently for the two thousand cargo ships and eight thousand pleasure yachts that pass every year. The Swedish Transport Administration engaged in a study to find the best replacement for the old bridge. A tunnel proved to be too expensive, a ferry inadequate and the question arose which type of bridge on exactly which location was best in technical, economic, ecological and aesthetic terms.

ZJA, together with Bosch Slabbers Landscape + Urban Design (landscape architects) and Iv-Consult (engineering consultancy) formed a Dutch team that collaborated with NRC Infrapro and the Swedish Transport Administration to formulate the specifics of the new bridge. The Swedes tackle these kinds of questions in a different way than the Dutch. The major difference is that instead of starting with a master plan and a set of requirements, the Swedes leave the pre-requisites more open in the beginning. Architects, landscape architects, construction experts but also ecological and environmental experts take part in a process managed by the Swedish Transport Administration to investigate how the exact design of the new bridge should be formulated. Apart from building professionals, also other parties are part of this preparatory trajectory, like representatives from the shipping business, the military who will use the bridge with heavy equipment, the municipalities and residents near the bridge, cyclist organizations, farmers, the fire brigade and fishermen.

In all cases, different techniques to open the bridge and different trajectories were taken into account with a change in location for the bridge impacting landscape, residents and nature in varying ways. In the end, after discussing the report detailing the four options, the Swedish Transport Administration made a well-reasoned choice for option 3, a low bridge with a moveable part that can be opened to let all shipping pass.

Following considerations in regards to the typology of the moveable part of the bridge, 4 different options were examined. A preliminary design published in December 2018 presented a bascule type bridge with a counterweight above the deck level. This design considered the fact that a double leaf bridge opens more quickly and requires less energy to open than a single leaf bridge. Furthermore the arms of a double leaf bridge are typically smaller and so make less of an impact on the landscape.

This paper was submitted for the 2019 Nordic Steel Conference in Copenhagen, Denmark.