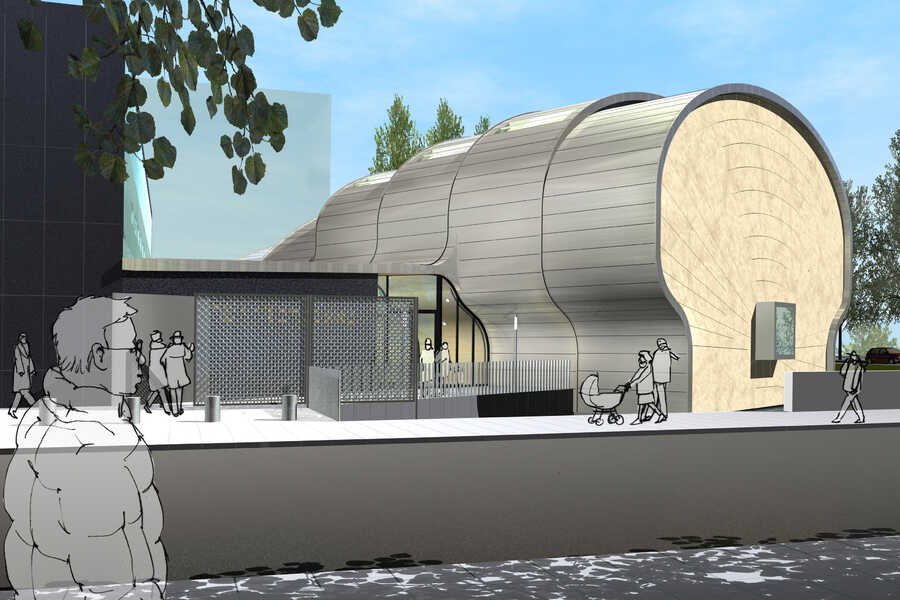 After winning a multi-stage designcontest the architects ZJA made the final design of a synagogue in Amstelveen. The building is topped by an undulating metal roof.

The synagogue has both a religious and a social function with both a synagogue space and a festival and reception room. In the synagogue 60 men and 60 women can be seated. Men and women are separated by a balcony. The design provides in the possibility of adding another 60 seats. The position of the synogogue is south-west.

The presence of water influenced the design. The expanse of water has been increased in order to let the facade face the water as much as possible. This results in beautiful reflections and reinforces the autonomous character of the building. Next to the synagogue a small block with commercial functions will be built. This block has a different shape but has been designed in the same material, ensuring a sense of unity between these two elements. The roof cocoons the inner space and will be topped by stainless steel. The roof contains twelve small windows, a tribute to the twelve extinct tribes of Israel.

The place of the furniture in the synagogue was religiously determined. Most important element is the cupboard with the Torah (the Holy Arc or 'Aron Hakodesj'). These are slightly visible from the outside through a translucent glass screen. On the inside the wall housing the cupboard is dressed with gold leaf. The rest of the interior is kept simple: carpet in the synagogue, natural stone and white walls. The partition with the Torah is covered on the outside with limestone from Jerusalem. The rest of the facade will get a finishing in black natural stone.