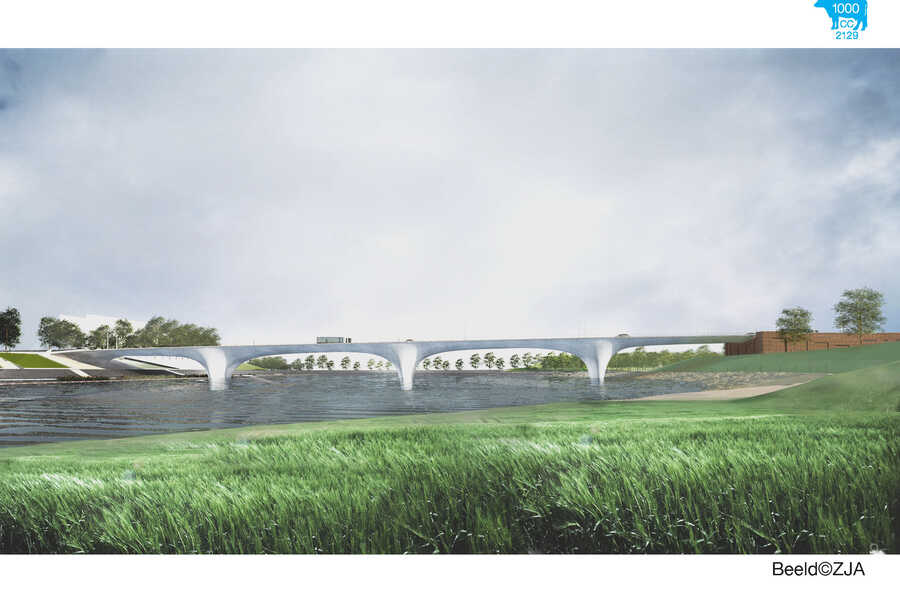 ZJA is to design the extended Waal bridge in Nijmegen. The extension of the existing historic bridge, built in 1936, is required as part of the plan to move the dyke at Lent, creating a new island. The Mayor and aldermen of the city of Nijmegen approved the draft design on November 1st, 2011.
The monumental 'Waalbrug', with its prominent structure of arches, is a famous icon crossing the river Waal. ZJA therefore made a design with respect for the historic main bridge upfront. The upper part of the bridge will have an austere character and ZJA will put the accent on the underside of the bridge and the three supporting pillars. The arches of the main bridge persist in the concrete substructure of the extension. Like a hop, skip and a jump, the waving motion which starts high in the main bridge, continues across the island and via the underside of the extension, crossing the water.

While the existing Waal bridge was built in the thirties to accommodate the increase of traffic, the new and extended Waal bridge is being built to accommodate the expansion of water. This turnaround requires a design that gives the users of the bridge a free and uninterrupted view of the vast surrounding landscape.

The stone bridgehead on the future island marks the transition between the old and the new bridge. This head is a building that can house various activities.
The technical design is further to be developed by the contractor, in cooperation with the architect. The bridge is planned to be completed in 2016, together with two other bridges, the dyke, the digging of the secondary channel and the construction of the island.