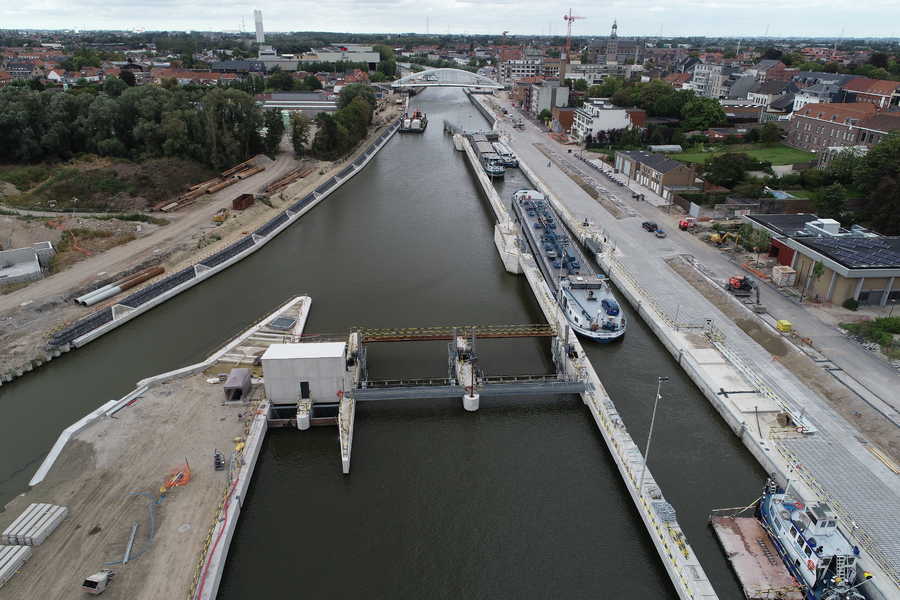 The river Leie, part of the Seine-Schelde connection and connecting the port of Antwerp with the Paris basin, is being made accessible to heavier and larger inland vessels. For this, not only locks are enlarged but also bridges are renewed and raised, and waterways widened. In Harelbeke, the lock complex in the Leie has been drastically enlarged and renewed. In collaboration with landscape architect Bureau Bas Smets, architect ZJA provided the architectural design for the new lock, the Hogebrug, the renewed quays and the Moleneiland. On Saturday January 11th, the Leiewerken in Harelbeke were officially opened and the approaching end of the works were celebrated.

Island in the Leie

In addition to the construction of a new lock, the Hogebrug and an energy-neutral weir, the Moleneiland has also been redesigned while the island is being developed into a green environment for living and recreation. A park-like environment is planned on the island with a footpath over the new fish ladder that gives fish the opportunity to pass the lock without danger. A new swing bridge connects the renewed Moleneiland with the centre of Harelbeke. A stepped terrace at the tip of the island offers residents a comfortable place to stay with a view over the water and the surrounding area.

A bridge as a meeting place

In 2016, the new Hogebrug was already delivered as the first phase of the works. The new bridge is higher than the old bridge, so that large ships have a free passage. The bridge has a widening in the middle. This central part has a square with wooden benches and offers pedestrians and cyclists a pleasant meeting place and a place to enjoy the view over the water.

Harelbeke and the Leie

Both the Moleneiland and the Hogebrug as well as the larger new lock and the adjacent pumping station are designed as part of the river landscape. Ultimately, the plan must strengthen Harelbeke's relationship with the river. Attractive places have been created on both sides of the banks of the Leie in Harelbeke through the creation of greenery, terraces and stairs. Residents can now enjoy attractive quays, nature and the Leie river that flows through Harelbeke.