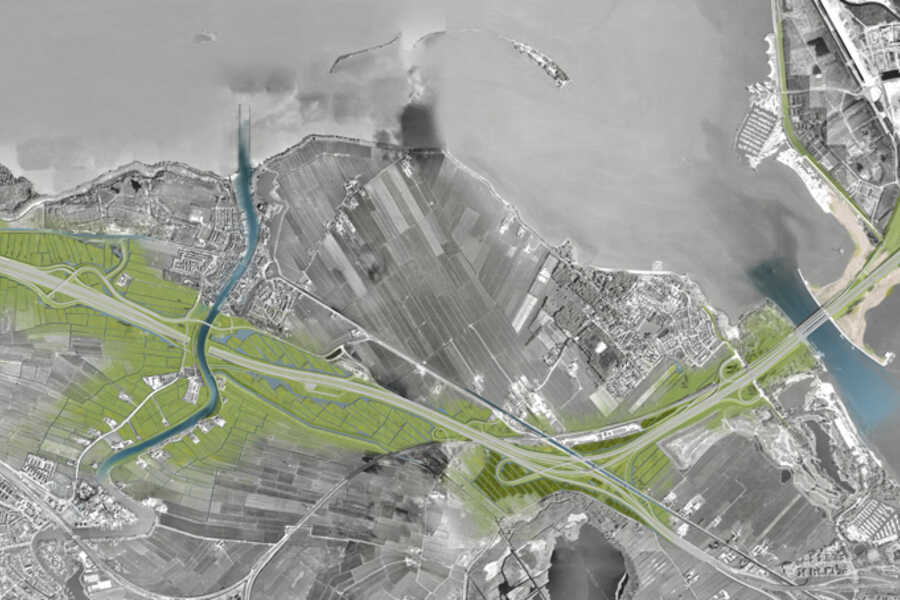 On December 12th, the DBFM (Design, Build, Finance and Maintain) contract between the Dutch Department of Waterways and Public Works ("Rijkswaterstaat") and the consortium SAAone was signed relating to the road expansion A1 / A6 Diemen - Almere Havendreef. This is one of five sub-projects concerning the road expansion Schiphol - Amsterdam - Almere (SAA).

The consortium SAAone, consisting of VolkerWessels, Boskalis, HOCHTIEF and DIF, have commissioned Zwarts & Jansma Architects with the architectural design of the sub-project A1 / A6 Diemen - Almere Havendreef.

The expansion of the A1/A6, over a distance of 23 km, concerns widening the route with additional lanes. This will give the A1 and A6 both 2x5 lanes between junction Diemen and the Hollandse Brug. The A6 will get 2x4 lanes from the Hollandse Brug to the Hoge Ring in Almere. The whole A1/A6 section will also have a 2 lane interchange. In addition, part of the A1 near Muiden will be repositioned.

The expansion of the A1/A6 further provides a permanent bypass from the A9 to the A1 at junction Diemen with a new bridge over the Amsterdam-Rhinecanal, an aquaduct under the river Vecht, an adaptation of the junction at Muiderberg and an extension of the Hollandse Brug. Between Almere Stad-West and Almere Haven a new intersection "Almere Havendreef" will be created and at the junction Hoge Ring a node will be realized.

The design of Zwarts & Jansma Architects includes almost 50 civil engineering constructions, including eco-passages, underpasses, viaducts, fly-overs, bridges, and 4 so-called "specials", namely, the A1 crossing with the Amsterdam-Rhinecanal, the A1 crossing of the Vecht, the A1 railway bridge and the A6 Hollandse Brug.

Construction is scheduled to start in 2014 and the work is expected to be ready in 2020.