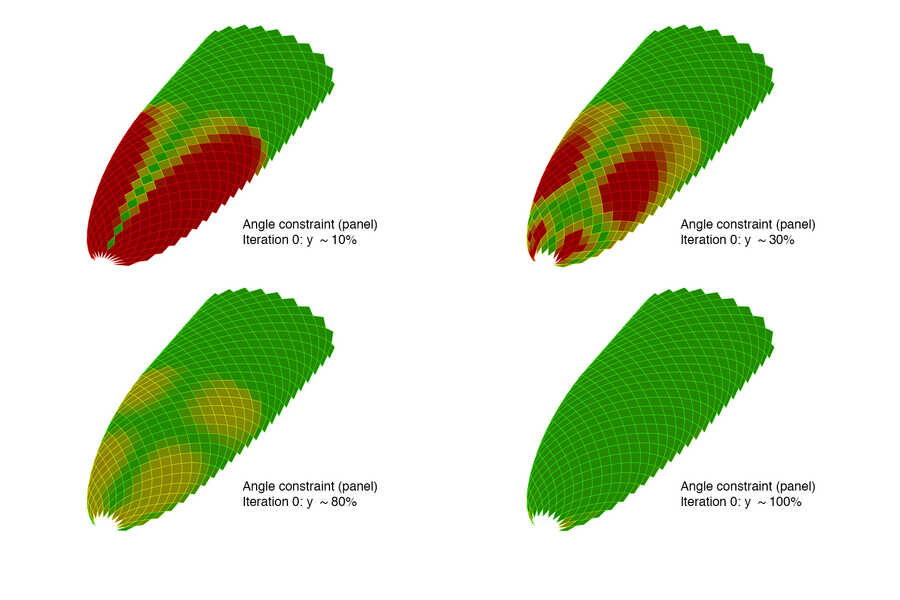 The architects ZJA have designed a new light rail departure station in The Hague, The Netherlands. The spatial roof structure ofthe station is made of rolled steel rectangular hollow sections arranged in two independent layers rigidly connected to each other. A glass envelope covering the roof structure matches the contours of the steel exactly. Since the diamond-shaped glass panes could only be attached to the outer layer of the steel grid, the panes (with edge lengths of approx. L30 m) are supported on two sides only. When optimizing the overall geometry, the double-curvature area at the nose of the roof structure became a special focus. Knippers Helbig Advanced Engineering has managed to minimize the deviation of each single glass pane from the single-curvature geometry to a maximum out-of-plane deformation of only 3 mm. Therefore, the project is a great example of how geometry development can influence structural design and enable new approaches.

The E-Line is part of RandstadRail, a network of light rail systems connecting the cities of The Hague, Zoetermeer and Rotterdam and the region in between. After several studies, new tracks were positioned: one at a height of approx. 15 m above grade over an existing tunnel, one at grade in the street Anna van Buerenstraat and one at the level of the bus platform.

Locating the track and the station at this level made it  highly visible and thus placed emphasis on the overall appearance of the combined viaduct and station. The client (essentially the municipality of The Hague and ProRail) asked ZJA to design a station with its own architectural identity oriented towards "Den Haag Centraal Station" and the newly established "Openbaar Vervoer Terminal" (Public Transport Terminal) and related in idiom to the light rail station at Beatrixlaan (designed and detailed by ZJA in the period 1998-2008). At the same time, the design needed to blend in seamlessly with an extremely complex urban context and, programmatically, become a part of the "transition machine" of the Openbaar Vervoer Terminal. The client asked for two light rail platforms and an arrival platform for the bus station.

The overall architectural shape represents the smooth transition from the "flat" viaduct to the spatial station and to the canopy that intersects the façade of the Openbaar Vervoer Terminal. The form therefore expresses the station's main function - to provide passengers with a clear, protective and comfortable route towards the Openbaar Vervoer Terminal and the bus platform, while also providing clear sightlines and visibility towards the HSE. Passenger and transportation flow are uniquely captured by a single sculptural gesture.

The actual roof has a total length of approx. 90 m and a maximum width (on plan) of 17 m; the first 22 m of the roof length are supported by the canopy, while the remaining 68 m are located on the bridge deck. The maximum height between roof support and roof centre is approx. 6 m. Roof supports are set 14.7 m above the ground, on top of the bridge deck and canopy. The structural members and the glazing create a quadratic pattern. The steel members, arranged in two separate layers, are curved and twisted following the overall shape. Curved glass strips follow the outer steel grid.

For the HSE, the aim was to avoid both triangular glass panes (resulting in substantial material waste) and complex welded nodes (expensive, aesthetically unfavorable). Therefore, during the HSE assignment, an experiment began to create a quadratic grid geometry combined with rolled steel members (strips) stacked in two layers. This allowed the nodes to be very simple and - in combination with bent glass - resulted in a single design direction.

The design selected is the outcome of an intense study at an early project stage in which various options were investigated, including different grid sizes - resulting in different tonnages, numbers of nodes and glass build-ups. Different node types were also studied, using various vertical/horizonlal sections - in one plane, in two separate layers, with hinged nodes/rigid nodes. The geometry of the roof structure was developed considering the architectural requirements, global strucrural design, glass analysis and fabrication constraints. The roof geometry consists of a regular/generic part with a constant cross-section and an irregular doubly-curved geometry oriented towards the central station.

This paper was submitted for the Challenging Glass Conference on Architectural and Structural Applications of Glass in 2016.