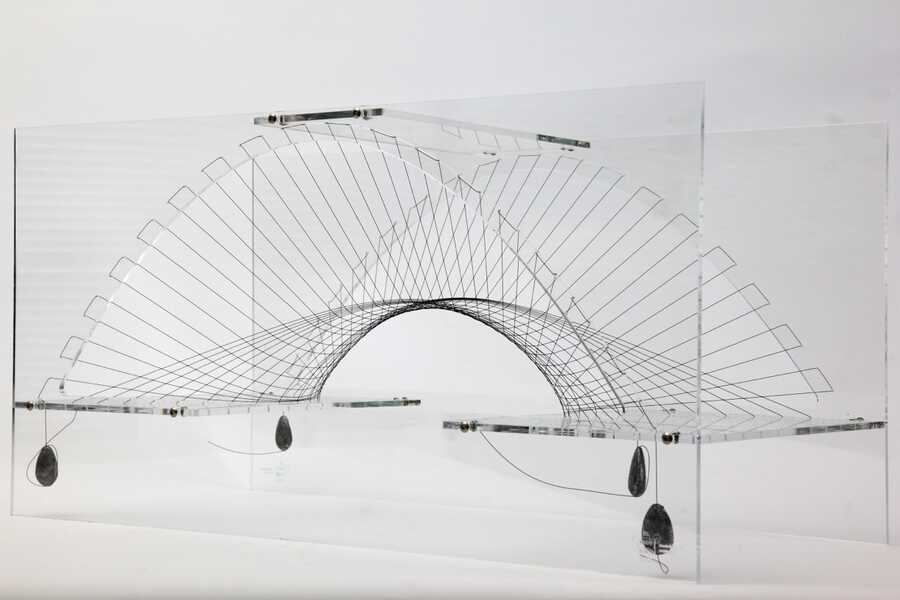 This paper presents two recent projects from the design practice of ZJA: an entry for the ARC Wildlife Crossing Design Competition and a preliminary design for the Extended Waal Bridge in Nijmegen, the Netherlands. In both cases, the design has been informed by the construction method of using a large cable-net formwork with a secondary system of geotextiles. This new concept builds upon existing architectural vocabulary, ideas and advantages found in fabric formwork technology,

This new concept builds upon existing architectural vocabulary, ideas and advantages found in fabric formwork technology, cable-nets and tensioned membrane roofs, to allow for large-scale, long-span structures. The resulting designs demonstrate how both thin shell and volumetric concrete structures can be made with this system. Both physical and digital, parametric design models were used during development of these designs. However, doubts surrounding the constructability of these designs have surfaced.

The jury for the ARC competition has praised the use of well established construction techniques in its winning entry. Similarly, the contractor of the Extended Waal Bridge will likely use conventional methods in favor of the flexible formwork that originally informed the geometry of the design. Insights into the feasibility and viability of this method are discussed based on these and other experiences during the design process.

In two recent designs for concrete structures by ZJA, in cooperation with Iv-Groep structural engineers, the use of fabric formwork was considered and investigated as a construction method. In this paper the design of both these projects and how they are different from each other is discussed. The role of physical models and digital, parametric models during the design process will be discussed as well as the way they influenced each other.

In the first project, the Landshape Wildlife Crossing, an entry for the ARC competition, the proposed method was carried through to the end. This resulted in a detailed technical design and building strategy. For the second proposal, the Extended Waal Bridge, it has not been decided yet which method will be used for its construction. Reasons why this is so are described, suggesting directions in which further research might be needed.

The architectural shapes that seemed appropriate for both these projects overlap with the forms that are naturally being generated by membrane structures. This suggested using such membranes as their formwork.

This paper was submitted for the International Conference on Flexible Formwork in 2012.