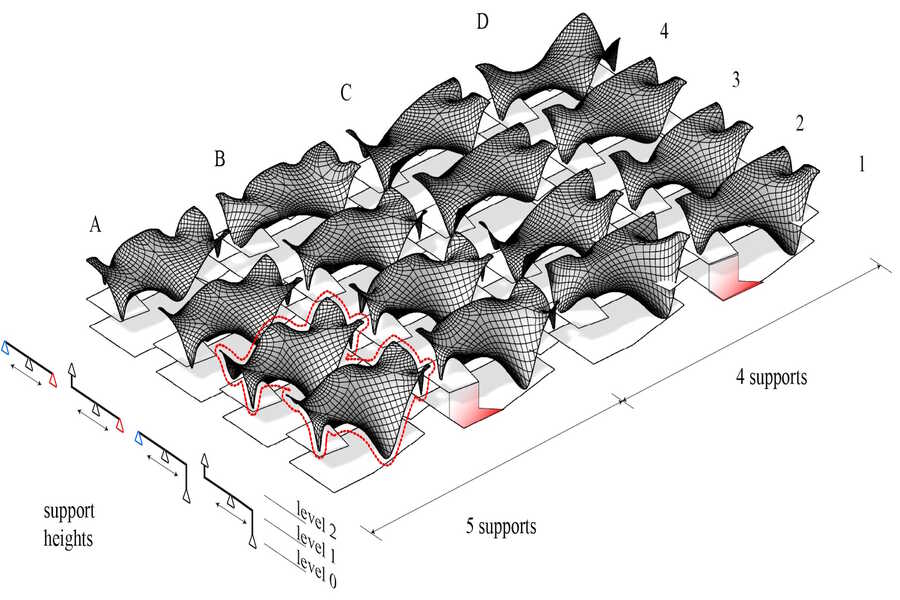 This paper describes the geometry and structural design of a cable-net and fabric formed, ferrocement sandwich shell roof, as part of the NEST HiLo project, to be built in Dübendorf, Switzerland, in 2016. The computational design process consists of an integrated parametric model used for multi-objective evolutionary shape optimisation of the shell, and subsequent analysis of its nonlinear behaviour.

This paper showcases three recent projects from the design practice of the architects ZJA: an entry for the ARC Wildlife Crossing Design Competition, a design executed for the Extended Waalbridge in Nijmegen, the Netherlands and HiLo pavilion under NEST which is a flagship project of Empa and Eawag a collaborative effort to contribute to the future of construction.

In all the three cases, the design has been informed by the construction method of using a large cable-net formwork with a secondary system of geotextiles. This new concept builds upon existing architectural vocabulary, ideas and advantages found in fabric formwork technology, cable-nets and tensioned membrane roofs, to allow for variable-scale, long-span structures.

The resulting designs demonstrate the computational tools developed to imitate and inform physical realities and validate how both thin shell volumetric concrete structures can be made with this system. Both physical and digital, parametric design models were used during development of these designs. Insights into the feasibility and viability of this method have been discussed based on experiences during the design process leading to construction and realization in real world.
Full papers: