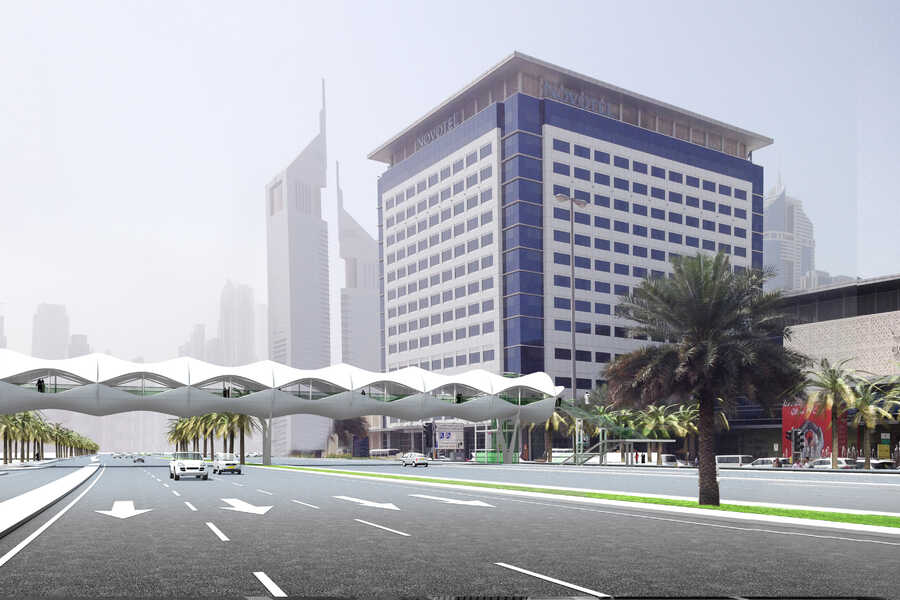 Dubai Roads & Transport Authority (RTA) adds another element to safe and smooth transport for all.
ZJA Zwarts & Jansma Architects has been commissioned by Parsons Overseas Ltd. to provide the architectural vision for a 75-meter long pedestrian bridge at 312th Road, near the Dubai World Trade Centre (DWTC) in the UAE. The bridge is to be owned and operated by the Dubai Roads & Transport Authority (RTA), so adding another element to RTA’s vision to provide safe and smooth transport for all.
Named the Convention Gate Pedestrian Bridge, the bridge connects the Dubai World Trade Centre (DWTC) with the parking lot on the other side of 312th Road, located directly adjacent to the DWTC.
In 2013, this road is to be broadened from a three- to a four-lane dual carriageway, including service roads.

During conferences and fairs, the DWTC attracts over 70,000 visitors, adding to the approximate 5,000 people then working there.
At the beginning and end of a trading day, this results in considerable congestion in the areas near the existing pedestrian crossings and the pick-up & drop-off zone.

The bridge consists of a space truss structure that crosses 312th Road in two spans of 35 and 40 meters and has a road clearance of 6.5 meters.

The latticework is covered with translucent and tensioned membranes, the design of which has been inspired by the sand dunes so familiar to the UAE. These membranes provide visitors with shade in the heat of the city. The bridge deck has a width of 4.5 meters and a freestanding height of about 3 meters.

At both ends of the bridge, two elevators and a staircase are situated in a large framework, positioned square to the bridge.

Construction of the bridge is expected to finish by the end of 2013.