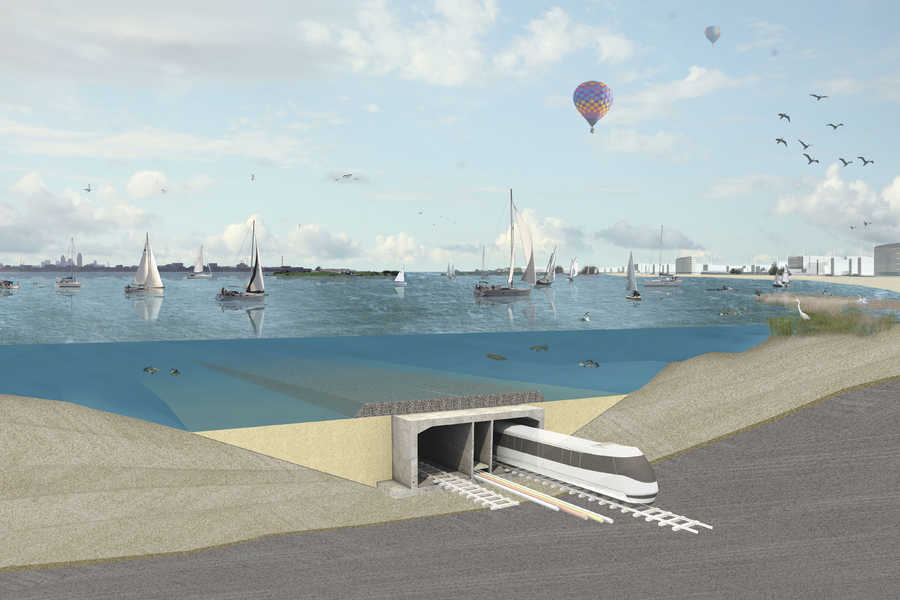 In the 21st century the city of Amsterdam appears to have entered a new phase of accelerated growth. All the more remarkable when you imagine that the country’s fastest growing city is very near by: Almere. With the extension Amsterdam IJburg 2 pending and Almere Pampus under construction, it is unmistakably clear that the two cities are rapidly growing closer together.

The IJmeer is however an obstacle in terms of accessibility. Tramline 26 now ends and turns on IJburg and when taking the car or the train to and from Almere, one faces quite a detour around the south, crossing the Hollandse Brug. A look on the map shows an obvious single solution: a high frequency rail connection, metro-style, connecting the south of Amsterdam via Diemen and IJburg to Almere. That connection is by far the best way to improve living and working in the new Metropolitan Area around the IJmeer. Preferably this line should depart from the new Middle Island at IJburg and cross under the IJmeer to resurface at Almere Pampus, and then proceed on to the railway station at Almere Centre.

The idea for a metro-style connection between Amsterdam and Almere across the IJmeer is not new. In 2012 the architectural studio ZJA, under supervision of Mott MacDonald, participated in an extensive enquiry into such a mobility plan. With the North-South metro line in Amsterdam having been put into operation and the recent accelerated growth of both cities the idea has become more of interest than ever before. For IJburg and the new western districts of Almere such a fast and reliable connection between Amsterdam and Almere is a matter of substantial economical significance. M55 runs from Almere Centre via IJburg and Diemen, passing railway station Amsterdam Zuid onwards to the garden cities in the north-west. With M55, the close proximity of Amsterdam and Almere is significantly enhanced.

A light and elegant bridge will cross the water to IJburg from the Diemerzeedijk. After leaving IJburg Middle Island the line enters a submerged tunnel tube for eight and a half kilometers to reach Almere Pampus. At both Diemerzeedijk and Almere Pampus, where the line surfaces again, artificial islands will be built around the tunnel entrances to create a rich ecological environment. The concrete tube of the tunnel itself will also provide new opportunities for aquatic life. In that way, M55 can contribute to the ecological revitalization of the IJmeer.

In this plan two existing stations will be extended (Diemen Zuid and Almere Centre), and five new stations will be built, two of which will be underground, IJburg Centre Island and IJburg Middle Island. The three other stations Pampus West, Pampus Centrum and Beatrixpark will be above ground.

The stations provide ecological benefits where possible but their main function is an urban one. IJburg Centre Island will become an important hub where people interchange to and from tram, local busses and the Zuid Tangent bus to Schiphol. The location near the banks of Middle Island allows this metro station to offer Sail & Ride, meaning the opportunity to arrive by boat or water taxi and then proceed by rail or bus.

The station on the Almere side of the tunnel, Almere Pampus West, is designed as part of a coastal environment with beaches, piers and a boulevard accessible to cars, cyclists and pedestrians, in an area that is both recreational and residential. Around Beatrixpark the station will be integrated into the campus area that is planned for educational centers and sports facilities.

The images may give the impression of a futuristic plan, but once one realizes how fast the developments go and how many people will soon live and work around the IJmeer, one understands the urgency: it is high time to build the M55.