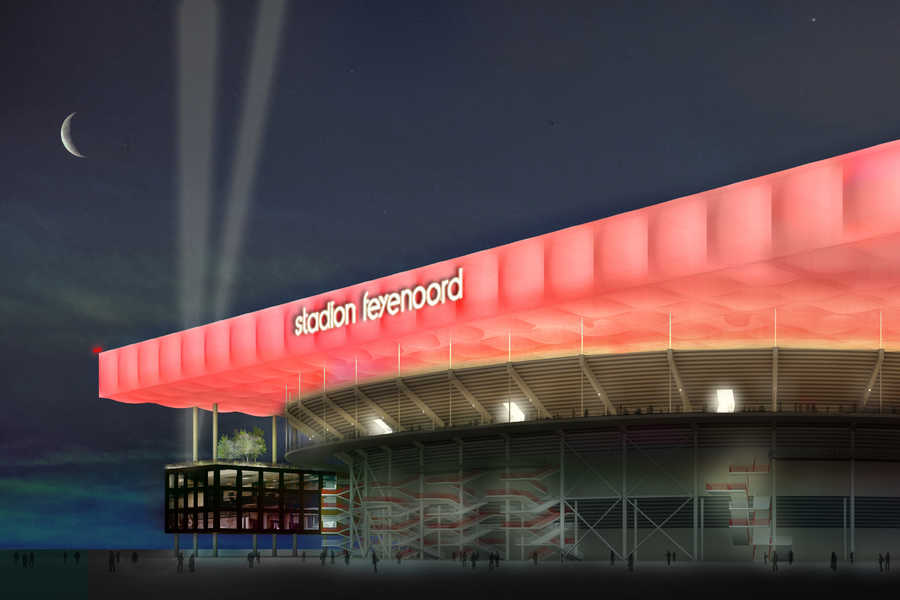 For many years, there has been a debate about the future of the old Feyenoord stadium (a.k.a. De Kuip/The Tub) in Rotterdam. After it was renovated and extended in 1997 (following the design made by the architectural studio ZJA), various plans have been presented to modernize the stadium as well as plans for an entirely new stadium. In 2014, ZJA contributed to this discussion with its own design proposal for The Renovated Kuip.

Yes, ZJA argues, The Kuip really needs more capacity and renovated stands with improved accessibility. However, all modernization should be focussed on the conservation of the unique atmosphere of the stadium, which is created by the lightness of the steel structure and the intimate engagement it allows with what is happening on the pitch. The Kuip is the home of Het Legioen (The Legion), the supporters club of Feijenoord, and it has to retain its identity as such.

In the new design, more than 7000 extra spectators can be seated in the stadium. Plus, all seats will comply with the quality standards of FIFA regarding optimal viewing angles and minimal obstacles blocking the view. Practically, this compliance means an improvement for about 17 percent of the seats and it is achieved by simply lowering the pitch a meter and a half.

A modern stadium has offices, different types of restaurants, concession stands and cafes, as well as skyboxes. Outside of match days it is a multifunctional building and a venue for conventions, business meetings, concerts and many other events. To realize this multifuntionality, ZJA designed two buildings on either side of the stadium and a promenade deck all around it, attached to the second ring. In total, 50.000 square meters of functional space is added to De Kuip.

The promenade serves as a food and drink court, while the extra lounges and skyboxes are connected to the stand on the first ring. Both buildings count three stories and are attached to the existing structure, while adding big new roof gardens.

The design for The Renovated Kuip has a new roof that spans the entire building and consists of a light steel structure. Its shape is simple and does not interfere with the characteristic facade of the Kuip. The huge roof consists of air-filled cushions made out of multiple layers of ETFE foil, creating a light-weight roof structure with good insulation which can easily be opened and shut. It also means fewer support columns are needed, that would otherwise block the view of the pitch or obstruct people moving about. The different layers of foil allow the air cushions to fulfill a wide array of functions, like preventing snow accumulation when filled with warm air or generating energy by being coated with PV cells.  The new roof also creates a huge outside space offering a splendid panoramic view over the entire city. The design presents this new space as a roof garden, adding an extra, green dimension to the stadium where work, sports, entertainment, recreation and culture meet. The roof, the promenade and the new buildings, can all be constructed without disrupting the regular use of the stadium.