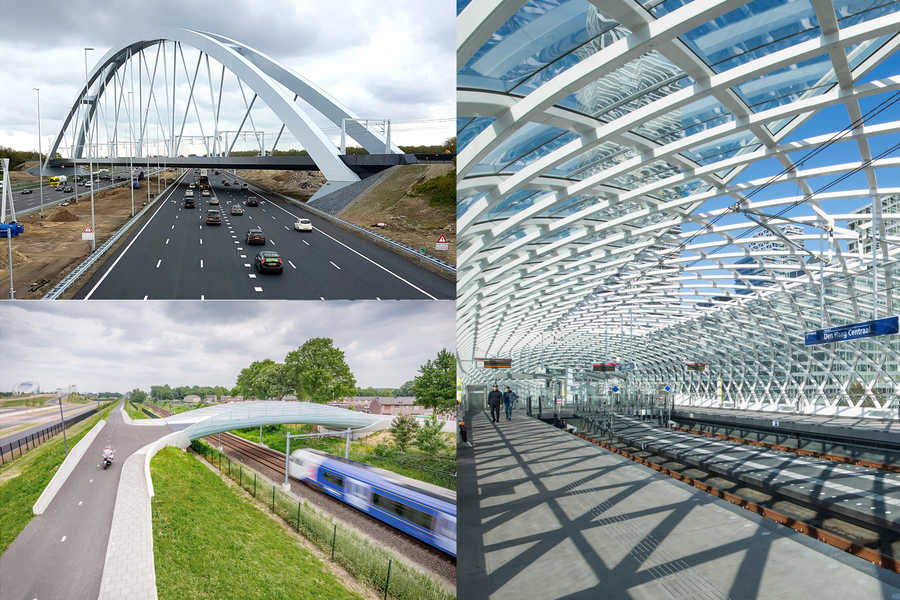 Three projects designed by ZJA Zwarts & Jansma Architects are nominated for the Dutch Steel Award 2018. Both the Zandhazenbrug Muiderberg and the bicycle and pedestrian bridge at Sittard-Geleen have a chance of winning the Dutch Steel Award in the category 'Infrastructure'. The Lightrailstation in The Hague has been nominated in the category 'Non-residential building'. Winners will be announced in October during the Nationale Staalbouwdag.

The new railway bridge Muiderberg, the Zandhazenbrug, is the first railway bridge that was built using S460 high strength steel. The Zandhazenbrug is also the longest railway bridge in the Netherlands with a free span of 250 meters. At the same time, a conspicuous bridge was undesirable from a landscaping point of view. The design assignment was to achieve a slender, slim, airy-looking bridge, whose color and design would not attract too much attention.

The bicycle and pedestrian bridge Sittard-Geleen

The bicycle and pedestrian bridge across the railway between Sittard and Maastricht lies not only firmly embedded in the green roadside scenery, but also has an elegant form and subtle details. The inviting hourglass form and the curved skin, that also extends in height, constitute the basis of a unique and at the same time challenging design.

The lightrailstation in The Hague is the departure and end station of the light rail connection between the cities of The Hague, Nootdorp, Pijnacker and Rotterdam. The eye-catcher of the station is the ensemble of the roofing of the platforms, which consists of curved glass and steel and the steel canopy that connects the lightrail station with the hall of The Hague Central.