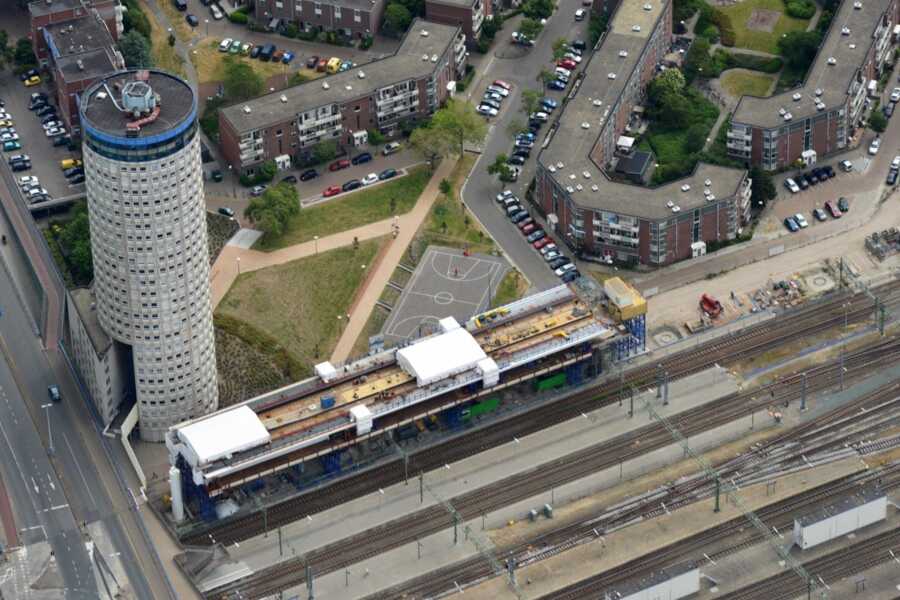 Inch by inch, the first of three sections of track deck of The Hague Start station Erasmuslijn (HSE), designed by ZJA, were manoeuvred into place last weekend.

Track deck as basis
The track deck is the basis for the new start - and end station of the light rail connection between The Hague and Rotterdam-Slinge. In the past few months, contractor BAM built the rail deck at a temporary construction site 150 meters from the station. From there, the 88 meter long deck had to be transported to its final destination at The Hague CS. Steel Supplier Iemants and lifting specialist Mammoet helped to move the whole construction this weekend.
.
Launch
A track deck weighing 800,000 kilos can’t just be moved like that. The deck was moved to its final position, over the columns, which will later carry the new rail connection. That was done using the launch method, the so-called “launch system”. This system consists of jacks and a push / pull unit (horizontal jacks). These jacks were mounted on a temporary work platform as well as on the columns. Little by little, these jacks moved the rail deck this augers towards the station. To prevent bending of the raildeck, a temporary support was placed at the Prins Bernhard Viaduct.
.
Grandstand
Moving the huge object attracted many visitors. From an especially built grandstand, interested parties could follow the manoeuvring of the rail deck from the first rank. This facility was eagerly used. Well over an estimated thousand spectators followed the proceedings.
.
Commissioning
The construction of the new station is carried out by ProRail, commissioned by the municipality of The Hague. Contractor BAM is building the new connection, designed by ZJA. The construction of the HSE has a contract value of 41 million euros and should be completed in the summer of 2016.