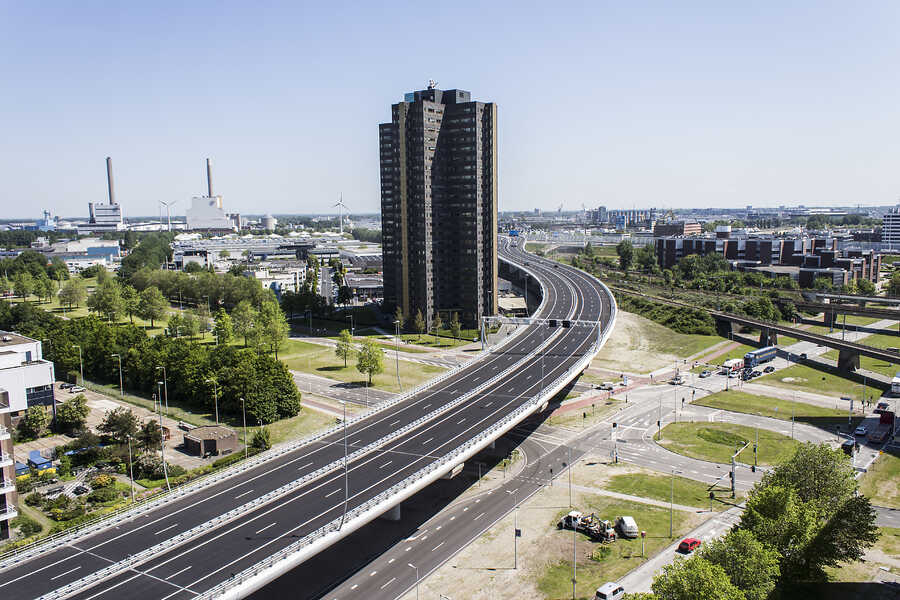 Besides being a civil engineering - and landscaping task, the design of road infrastructure has also become an architectural design task. One of the first projects in the Netherlands, for which an architectural program of requirements has been drawn up, is the Westrandweg near Amsterdam (A5 motorway).

The A5 motorway is a 17 kilometre long stretch, which passes through the Schiphol - and Amsterdam western harbour area. The road connects the A4 motorway (at junction “De Hoek”) via junction “Raasdorp” (A9) with the second Coentunnel. With the construction of both the second Coentunnel and the Westrandweg, accessibility to the northern part of the urban agglomeration known as “Randstad” and the Amsterdam western harbour area is improved substantially.
The A5 motorway consists of two sections: the Extended Westrandweg (completed in 2003) and the Westrandweg, which is currently under construction. Because of the many intersections with other infrastructure and the complexity of the subsoil, the Westrandweg is raised over its full length. More than half of the motorway is positioned on an elevated section of land, with the remainder of the motorway designed as a viaduct.

The centerpiece of the project is a 3.3 kilometre long viaduct, running along the Basisweg in the western harbour area: the longest viaduct in the Netherlands. The design included challenges not previously addressed in the Netherlands. Like for example: How do you escape from such a viaduct? What happens underneath? After multifunctional use had been rejected, it was decided to raise the deck of the motorway high enough to allow for the access of adequate day lighting under the viaduct.